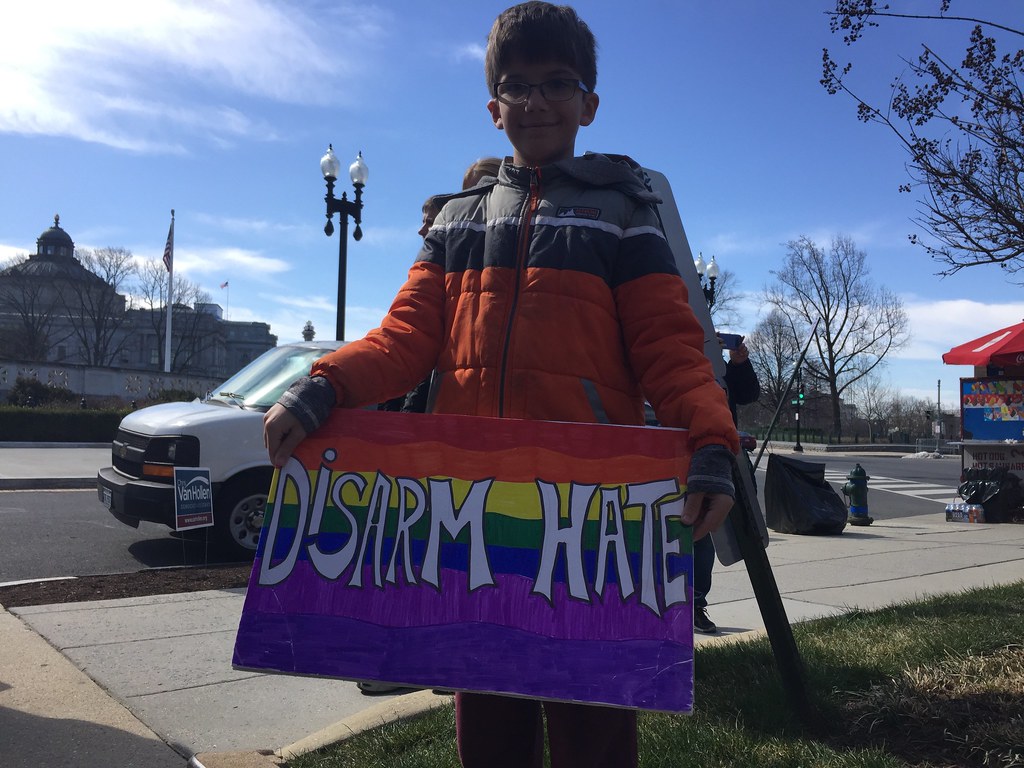 Prayer of the Day: O Lord God, you teach us that without love, our actions gain nothing. Pour into our hearts your most excellent gift of love, that, made alive by your Spirit, we may know goodness and peace, through your Son, Jesus Christ, our Savior and Lord, who lives and reigns with you and the Holy Spirit, one God, now and forever.

This is not a “new” commandment in the absolute sense. The commandment to love one’s neighbor as oneself comes directly out of the Hebrew Scriptures and lies at the heart of Torah. It is new only in the sense that we view it now through the lens of Jesus’ death and resurrection which reveals the depth of God’s love for us and which we, for our part, are called to practice toward our neighbors and one another. In Jesus, God takes love to extremes.

The term “extremism” has unsavory nuances. If someone calls you an extremist, it is probably not intended as a complement. The word conjures up images of suicide bombers, white nationalists and religious fanatics of all flavors pushing their perverse agendas by all means necessary-including violence. To be sure, these are all examples of extremism. But are they the only kinds? What about people like Saint Vincent de Paul who took generosity to extremes? What about people like Saint Francis of Assisi who took compassion to extremes? Isn’t discipleship about taking love to extremes? Isn’t Jesus’ determination to exercise love and healing rather than self defense against those who came to take his life about the most extreme expression of love imaginable?

Like everyone else, those of us in the church are suspicions of people who “take things to extremes.” We prefer moderation. If there must be change, let’s make it incrementally. Let’s be thoughtful and deliberate. By all means, let’s not take things to extremes! According to our lesson from the Book of Acts, the church leaders in Jerusalem felt that perhaps Saint Peter’s baptism of a gentile family was taking things a bit too far. They would become increasingly alarmed by Saint Paul’s mission to the gentiles.  Many in the New Testament church seemed to feel that Paul was taking things to extremes. The Book of Acts gives us the picture of a church struggling to keep up with the Spirit of God pulling it incessantly to new extremes.

“Moderation” and “tolerance” are the supposed counterbalancing virtues to the vice of extremism. Admittedly,  prudence might dictate practicing moderation in some areas of life, such as alcohol consumption. Wisdom and charity require my tolerance of the neighbor’s screaming children. But neither of these tepid virtues serve us well as guiding principles. We fault Nazi extremism for crimes against humanity, yet could we not as much fault millions of moderates of that time who tolerated conditions under the Third Reich and chose not to take love to the extreme of standing with the victims of state violence? Moderation does not go to the extreme of supporting racism, sexual abuse of women, separation of families, abuse of power and environmental degradation. But it will tolerate all of these things as long as the stock market goes up and unemployment goes down. Moderation would never deny a child food or access to medicine; but it will tolerate childhood poverty and disease if the price of addressing it takes a bite out of the wallet. Turns out that moderation and tolerance are often just polite words for cowardice and self-preservation.

Extremism is not really the problem. It’s all a matter of the extremities. Extremists for hateful ideologies have demonstrated that they are prepared to injure, kill and even die for their perverse beliefs. They are prepared to close borders, gate their communities and segregate their schools to protect the purity of their nation and culture. In response to all of this, the last thing we need are moderates willing to tolerate it. What is needed are extremists unwilling to tolerate evil, extremists equally committed to opening borders, breaking down walls and pledging their allegiance, not to any flag or nation, but to that kingdom composed of “every nation, from all tribes and peoples and languages, standing before the throne and before the Lamb.” Revelation 7:9. If extremists of hate are prepared to embrace a bomb in furtherance of their perverse aims, extremists of love must be prepared to embrace the bomber accepting all that may follow. Disciples of Jesus are those who are prepared to die taking love to extremes.

Here is a poem by Denise Levertov dismissing the banal moderation that makes a false virtue of tolerance.

Genial poets, pink-faced
earnest wits—
you have given the world
some choice morsels,
gobbets of language presented
as one presents T-bone steak
and Cherries Jubilee.
Goodbye, goodbye,
I don’t care
if I never taste your fine food again,
neutral fellows, seers of every side.
Tolerance, what crimes
are committed in your name.
And you, good women, bakers of nicest bread,
blood donors. Your crumbs
choke me, I would not want
a drop of your blood in me, it is pumped
by weak hearts, perfect pulses that never
falter: irresponsive
to nightmare reality.
It is my brothers, my sisters,
whose blood spurts out and stops
forever
because you choose to believe it is not your business.
Goodbye, goodbye,
your poems
shut their little mouths,
your loaves grow moldy,
a gulf has split
the ground between us,
and you won’t wave, you’re looking
another way.
We shan’t meet again—
unless you leap it, leaving
behind you the cherished
worms of your dispassion,
your pallid ironies,
your jovial, murderous,
wry-humored balanced judgment,
leap over, un-
balanced? … then
how our fanatic tears
would flow and mingle
for joy …

Denise Levertov (1923–1997) never received a formal education. Nevertheless, she created a highly regarded body of poetry that earned her recognition as one of America’s most respected poets. Her father, Paul Philip Levertov, was a Russian Jew who converted to Christianity and subsequently moved to England where he became an Anglican minister.  Levertov grew up in a household surrounded by books and people talking about them in many languages. During World War II, Levertov pursued nurse’s training and spent three years as a civilian nurse at several hospitals in London. Levertov came to the United States in 1948, after marrying American writer Mitchell Goodman. During the 1960s Levertov became a staunch critic of the Vietnam war, a topic addressed in many of her poems of that era. Levertov died of lymphoma at the age of seventy-four. You can read more about Denise Levertov and sample more of her poetry at the Poetry Foundation Website.