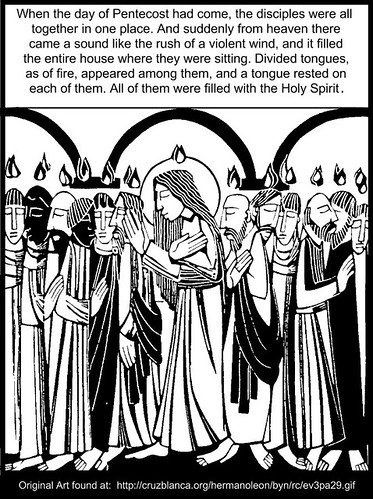 Prayer of the Day: God our creator, the resurrection of your Son offers life to all the peoples of earth. By your Holy Spirit, kindle in us the fire of your love, empowering our lives for service and our tongues for praise, through Jesus Christ, our Savior and Lord, who lives and reigns with you and the Holy Spirit, one God, now and forever.

“Come, let us build ourselves a city, and a tower with its top in the heavens, and let us make a name for ourselves; otherwise we shall be scattered abroad upon the face of the whole earth.”

“I have said these things to you while I am still with you. But the Advocate, the Holy Spirit, whom the Father will send in my name, will teach you everything, and remind you of all that I have said to you. Peace I leave with you; my peace I give to you. I do not give to you as the world gives. Do not let your hearts be troubled, and do not let them be afraid.” John 14:25-27.

The lessons for Pentecost juxtapose two types of naming. In our reading from Genesis, the peoples of the world are determined to make a name for themselves. They are concerned lest they be “scattered abroad upon the face of the earth.” They are frightened by the prospect of losing their national identity, losing their homeland, losing their language and culture. They fear that their nation will become diluted to the point where it is no longer recognizable. So, they decide to build the biggest city and the biggest tower imaginable, a tower with “its top in the heavens.”[1]

The fear of “being scattered abroad on the face of the whole earth,” of being culturally diluted and racially contaminated is very much alive and well these days. It is being everywhere exploited by leaders eager to “make a name for themselves” and their tribes. The United Kingdom’s vote to withdraw from the European Union seems to have been driven in large part by xenophobic fears of immigration and a loss of national identity. Donald Trump rode to victory in 2016 on an electoral tidal wave of racial hate and resentment under the nationalistic howl of “America first.” Last year, Prime Minister Viktor Orban of Hungary, whose campaign was driven by nationalistic and anti-Islamic rhetoric, won a sweeping victory in national elections. Italy, under Matteo Salvini and his Northern League, has long been moving to ever more extreme nationalistic, anti-migrant policies. Last Sunday, Marine Le Pen’s far-right Rassemblement National rode a wave of nationalist sentiment to win a majority of the vote in France’s election to the European Parliament.

Over against this spirit of self promotion and self preservation behind the people of Babel’s desire to make a name for themselves, our gospel lesson brings us to Jesus on the eve of his crucifixion promising to send a quite different Spirit through the name that God is establishing for him. Judas asks Jesus why he does not show himself to the world as he has revealed himself to his disciples. That is a reasonable question.  If it is for the salvation of the world that Jesus came, shouldn’t Jesus be promoting himself to the world? Shouldn’t he be trying to “make a name for himself?” Jesus’ answer is that God is making a name for him and that God will manifest Jesus to the world. But God will not do so through any show of force. Jesus is revealed in the lives of his disciples who are to receive the Spirit of God that will enable them to practice the new commandment to love one another as they have been loved. As we learn in John 17, the love that binds the Trinity as one will be the glue holding together the community of Jesus. The church is to be a sign and a mediator of God’s love for the cosmos. That is how God makes a name for Jesus.

Our lesson from the Book of Acts puts shoe leather on Jesus’ words. Here the nations represented by their various tongues are brought together by the Spirit of God. This marvelous story puts the lie to fears of cultural dilution and national extinction brought about by cultural diversity. To the contrary, each nation becomes more than what it is, richer than what it was and greater than it could ever be on its own when grafted with all other nations, tribes and peoples into the fabric of God’s new creation under the gentle reign of God’s Spirit. God’s Spirit is able to unite us in spite of our diversity and enrich our existence precisely because of it. This bold promise of Pentecost assures a world on the brink of disintegration that the Spirit of oneness holding it together is mightier than the spirits of nationalism, racism and tribalism threatening to pull it apart.

Here is a poem by Bob Kaufman urging us to believe in the signs of hope, beauty and renewal that are the hallmarks of God’s reign over cynical assessments of “conditions on the ground.”

Believe in this. Young apple seeds,
In blue skies, radiating young breast,
Not in blue-suited insects,
Infesting society’s garments.
Believe in the swinging sounds of jazz,
Tearing the night into intricate shreds,
Putting it back together again,
In cool logical patterns,
Not in the sick controllers,
Who created only the Bomb.
Let the voices of dead poets
Ring louder in your ears
Than the screechings mouthed
In mildewed editorials.
Listen to the music of centuries,
Rising above the mushroom time.

Source: Cranial Guitar (c. 1996 by Eileen Kaufman, pub. by Coffee House Press).  Bob Kaufman (1925 –1986)  was an American poet, jazz performance artist and satirist.  Born in New Orleans, he was the 10th of 13 children born to an African American mother and Jewish father. He joined the United States Merchant Marine at the age of thirteen, but  left in the early 1940s to  study literature at New York’s  New School for Social Research. There he came under the influence of beat poets,  William S. Burroughs and Allen Ginsberg. In 1959, along with Ginsberg  and poets John Kelly, A. D. Winans, and William Margolis, Kaufman founded Beatitude magazine where he also worked as an editor. You can read more about Bob Kaufman and sample more of his poems at the Poetry Foundation website.

[1] From primeval times we are warned against people with fixations on building huge cities, towers and walls.