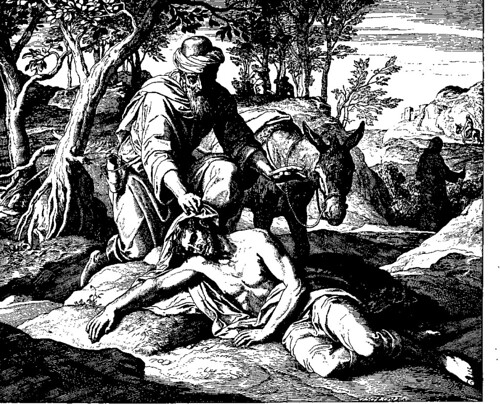 Prayer of the Day: O Lord God, your mercy delights us, and the world longs for your loving care. Hear the cries of everyone in need, and turn our hearts to love our neighbors with the love of your Son, Jesus Christ, our Savior and Lord.

“Good Samaritan” is one of those biblical allusions that, in common secular parlance, has come altogether loose from its biblical moorings. When the term is used to describe someone, it usually means no more than that s/he goes out of her/his way to help a stranger. That is admirable, of course, but hardly above and beyond the call of duty. We don’t prosecute people who drive past an elderly person on the roadside with a flat tire in obvious need of help. But most of us would probably think such behavior more than a little shabby. Neighbors should help neighbors. It’s the right thing to do and, besides, you never know when you might find yourself in need of a little neighborly assistance.

But then, of course, you have to ask the question posed by the lawyer prompting the parable: Who is my neighbor? Is a neighbor someone from my neighborhood? A fellow American? People who speak English only? Folks that belong to my church, my lodge, my party? Invariably, the question always comes down to this: “Where do you draw the line?” At our southern border with Mexico? Along the NATO alliance countries? Between legal and illegal residents of this country? And what about enemies? Do I still have to be a neighbor to the folks who want to kill me and people like me? We can debate these questions endlessly because you can always make good arguments for where you draw your lines. That is where the lawyer was trying to take his discussion with Jesus. He wanted to bait Jesus into a “Where do you draw the line” argument.

Jesus does not answer the lawyer’s question. As he so often does, Jesus tells a story to help him ask better questions. We have gotten into the habit of calling this story of the compassionate Samaritan a parable, but I am not convinced that it was only that. It is different from most parables in that Jesus gives us some geographic details, such as the fact that this all took place on the road from Jerusalem to Jericho. Why would that matter if this were only a parable? Furthermore, if this were only a parable, the lawyer might simply have said, “Nice story Jesus. But you don’t know Samaritans like I do. They wouldn’t cross the road to spit on a dying Jew. In fact, they would probably be only too happy to finish him off.” The lawyer, however, says no such thing. He doesn’t challenge Jesus’ account. Could that be because the story was drawn from an event that really happened? Could it be that this event become a parable only because Jesus used it that way?

Whatever the case may be, Jesus would have us understand that neighborliness is not a duty whose scope is a matter of interpretation. Neighborliness is a miracle that happens when the Spirit of God opens our eyes so that we can see, even in our enemies, the image of God and the object of God’s love. Jesus tells us that the Samaritan was “moved to pity” when he saw the victim of the robbers. Luke 10:33. But the Greek verb means a lot more than that. The Greek text expresses a kind of compassion that gets under the skin, a kind of caring that allows the Samaritan to see the world through the eyes of this man, this victim, this enemy and recognize in his suffering the call of God to act with godly compassion. Now a miracle like that might not happen very often. But even if it happened only once in all of history-it proves that such love is not humanly impossible. It proves that it is possible to love your neighbor, including your alien neighbor, your hostile neighbor and your enemy neighbor. As our lesson from Deuteronomy points out, it “is not too hard for you, nor is it too far away. It is not in heaven, that you should say, ‘Who will go up to heaven for us, and get it for us so that we may hear it and observe it?’ Neither is it beyond the sea, that you should say, ‘Who will cross to the other side of the sea for us, and get it for us so that we may hear it and observe it?’ No, the word is very near to you; it is in your mouth and in your heart for you to observe.” Deuteronomy 30:11-14. The opportunity for you to obey the law of love is as near to you as your needy neighbor. You can do it.

Jesus would have us know that this is not, as the lawyer assumed, a legal issue. It’s a grammatical one. “Your problem, son,” says Jesus to the lawyer, “is that you are focused on nouns and God’s commandments are all about verbs. If you thought about what it means to be a neighbor half as much as you fret over how to define one, we wouldn’t be having this silly conversation. Now let’s put a stop to this ridiculous bickering over how to define a neighbor and get on with the business of being one.”

It is our coldness of heart that leads us to limit the reach of our compassion and our duty of love along the lines of neighborhood, nation, family, race and tribe. “Our country is full, our area’s full, the sector is full. We can’t take you anymore, I’m sorry, can’t happen. So turn around, that’s the way it is.”[1] So says our president to families with their children fleeing violence and starvation to what our national mythology says is a land of promise. I have come to expect such sentiments in the halls of congress and in the White House. What is truly heartbreaking is having to hear them spoken in Christian sanctuaries and on the lips of those who would hold themselves out as church leaders. It is heartbreaking that so many of us seem to have lost the capacity for compassion.

On the other hand, there are also many parabolic miracles of compassion occurring each day to remind us that neighborly love is very much alive. Churches across the country are offering shelter and sanctuary to families in danger of deportation and separation. Lawyers, physicians and healthcare workers are donating their time and resources to address the deplorable conditions growing out of the culture of fear and intimidation created by our country’s immigration policies. Religious leaders of all persuasions are speaking out against the inhumane incarceration of children and separation of families at the border. These are living parables of hope.

Here is a poem by William Blake speaking of divine love as it is manifested in compassion that draws no lines.

To Mercy, Pity, Peace, and Love
All pray in their distress;
And to these virtues of delight
Return their thankfulness.

For Mercy has a human heart,
Pity a human face,
And Love, the human form divine,
And Peace, the human dress.

Then every man, of every clime,
That prays in his distress,
Prays to the human form divine,
Love, Mercy, Pity, Peace.

And all must love the human form,
In heathen, Turk, or Jew;
Where Mercy, Love, and Pity dwell
There God is dwelling too.

Source: This poem is in the public domain. William Blake (1757-1827) was an English poet, painter and printmaker. Though unrecognized during his lifetime, Blake eventually came to be considered an important figure in poetry of the Romantic Age. He was born in Soho, London and attended school only long enough to learn reading and writing. Blake considered himself a committed Christian, though he did not identify with the Church of England in which he was baptized and had little use for organized religion. The Bible was an early and profound influence on Blake. It remained a source of inspiration throughout his life. Blake met and married Catherine Boucher in 1782. She was five years his junior and lacked formal education. Blake taught his young wife to read and write, however, and she assisted him in his artistic endeavors throughout the rest of his career. You can learn more about William Blake and sample more of his poetry at the Poetry Foundation website.

[1] I recall how a little over a decade ago another Republican President, namely, George W. Bush, told the country: “I want to remind people that family values do not stop at the Rio Grande River. People are coming to our country to do jobs that Americans won’t do, to be able to feed their families. And I think there’s a humane way to recognize that…” That was before the Grand Old Party was overwhelmed by the howling lynch mob appropriately referred to as its “base.”