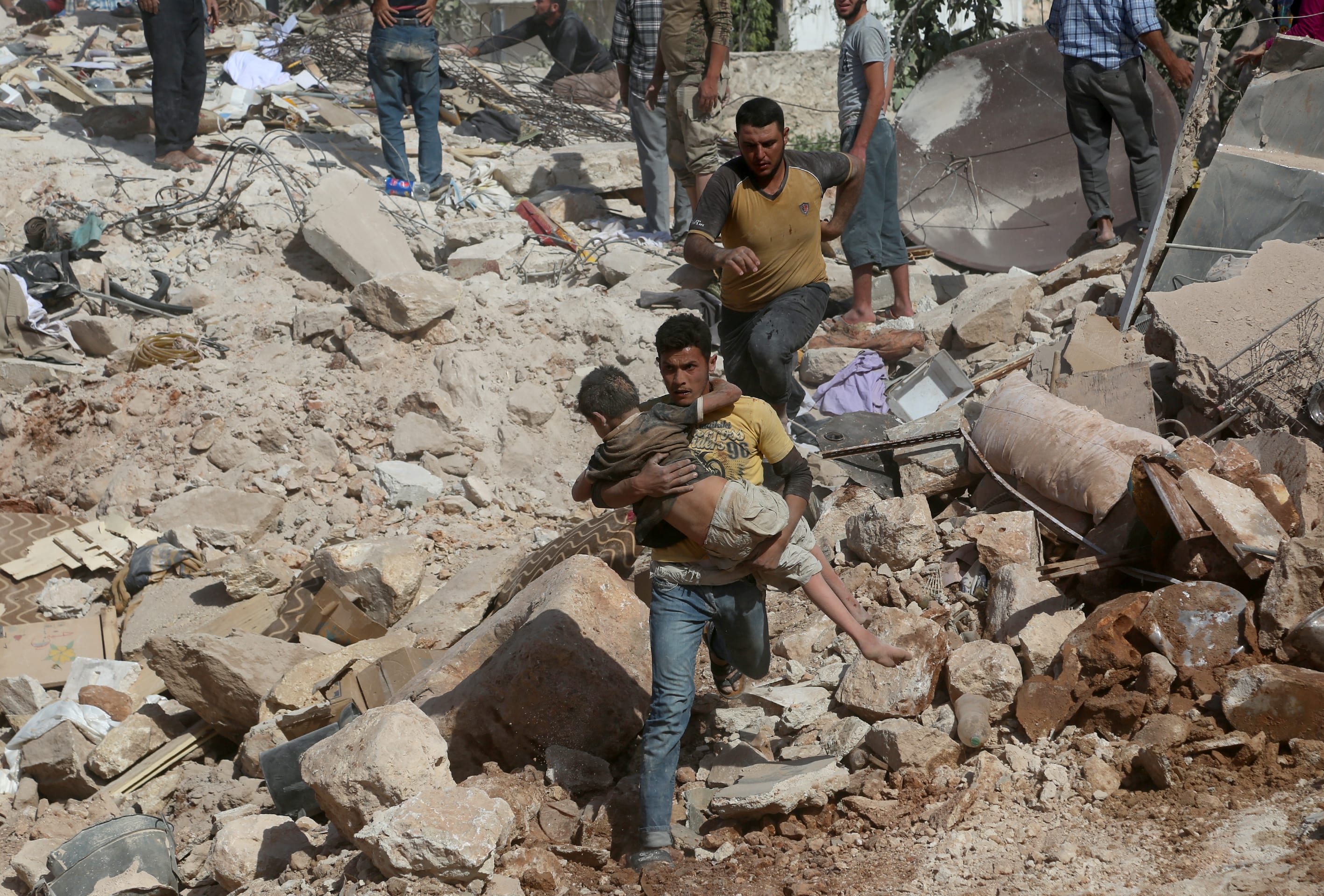 Prayer of the Day: Almighty God, you have knit your people together in one communion in the mystical body of your Son, Jesus Christ our Lord. Grant us grace to follow your blessed saints in lives of faith and commitment, and to know the inexpressible joys you have prepared for those who love you, through Jesus Christ, our Savior and Lord, who lives and reigns with you and the Holy Spirit, one God, now and forever.

“But I say to you that listen, love your enemies, do good to those who hate you, bless those who curse you, pray for those who abuse you. If anyone strikes you on the cheek, offer the other also; and from anyone who takes away your coat do not withhold even your shirt. Give to everyone who begs from you; and if anyone takes away your goods, do not ask for them again. Do to others as you would have them do to you.” Luke 6:27-31

Like me, you have probably been watching the tragic images of ethnic cleansing taking place in northern Syria as Turkish forces kill and displace thousands of Kurds. As a professed pacifist, I feel particularly conflicted at times like these. I am appalled by our nation’s betrayal of a people who have put their lives on the line to help us in our fight. However critical anyone might be about our military involvement in the middle east, there can be no denying that President Trump’s cowardly, inept and possibly corrupt handling of the situation has precipitated a humanitarian crisis. I sympathize with my friends who argue that we need to reverse course and intervene militarily. How can we stand by and allow innocent people to be slaughtered? Would Jesus have us turn our backs on the victims of genocide? Responding to these arguments with anything short of affirmation feels-just wrong.

It is also fair to point out that my personal profession of pacifism is practically meaningless. There is no longer a military draft and even if there were, it is highly unlikely that the number of a man my age would ever come up-unless the war is going very badly for us. It is easy for me to espouse turning the other cheek when no one is laying a hand on mine. No one is shooting at me and my loved ones and no hostile army is driving me out of my homeland. “Easy enough for you, pastor, to turn somebody else’s cheek,” you might say.

That’s all fair. Pacifism is a luxury for straight, white men like me, though perhaps it shouldn’t be. Maybe those of us who identify as pacifists should, as Paul would say, “present [our] bodies as a living sacrifice” (Romans 12:1), taking up residence in places like northern Syria offering what assistance we can to the injured, displaced and homeless. If our witness is to be credible, we who live for peace should be at least as willing to die for it as those who fight for it. I am clearly not there yet and so you might rightly argue that my commitment to peace is only skin deep. I don’t have any concrete, positive solutions for the Kurds. So who am I to criticize those who do have solutions, however incomplete and morally imperfect they might be? Perhaps I should just keep my mouth shut.

Still, here we are on All Saint’s Sunday with Jesus commanding us to love our enemies, do good to those who hate us, turn the other cheek to an adversary that strikes us and refrain from defending our possessions. Near as I can tell, Jesus is taking violence and coercion off the table for his disciples. Therefore, if I would be Jesus’ disciple, I must renounce violence-even when it appears to be the only means of preventing what I anticipate will be even greater violence and injustice. It’s really quite simple, if extremely difficult in practice.

Here is where the “what about…” questions arise. “What about women beaten by abusive husbands?” “What if a deranged serial killer were about to put a knife in the heart of my three-year-old daughter?” “What would I do if I were president and knew that a dictator was about to conduct a campaign of ethnic cleansing against a defenseless group of people within his border?” “What would I have done about Hitler?” Such emotionally charged missives are usually the first responses I get from people who learn of my persuasion. As a former trial attorney, I recognize them for what they are: hypothetical questions that are not calculated to illicit information, but to extract a precise answer. To that end, they frame the issue in binary terms: fight or allow evil to prevail.

When you begin to identify the host of assumptions built into these hypotheticals, however, their superficiality becomes obvious. Fighting back presupposes that the woman in the first hypothetical has the physical strength and capacity to overcome her abuser. Lacking that, violent resistance is more likely to make matters worse for her than better. The second hypothetical assumes that I am packing a lethal weapon at the time of my daughter’s hypothetical attack-something I never do since I am a pacifist and, even if I were not, I understand that loaded weapons and children don’t mix well. It is also assumed that the attacker cannot not be persuaded against doing harm. It is assumed that I am a good enough shot to hit the attacker and not my daughter as well. (But if that is the case, why not just shoot the knife out of the attacker’s hand?) Under the third scenario you have to wonder how a pacifist managed to get elected commander and chief of the armed forces and entrusted with the nuclear codes. And under the Hitler scenario, just when would I be president? At the time of the Treaty of Versailles when I might have used my diplomatic influence to mitigate the punitive and humiliating victor’s justice imposed on Germany in defeat, thereby avoiding the circumstances giving rise to National Socialism? The problem with all of these questions is that the questioner is allowed to manipulate the facts in such a way that violence appears to be the only reasonable option. Give me the same freedom to control the assumptions and I can compel a different outcome.

The unstated assumptions in all these “what if” questions that seem to compel violent resistance as a moral imperative do not comport with reality. In fact, violence is seldom, if ever, required to resolve conflict. Every day nations resolve disputes over all manner of issues through diplomatic channels without resort to military force. Every day police officers respond to domestic disputes, bar fights and neighborhood disturbances without exercising force of any kind. In fact, most police officers complete their entire careers without ever having to discharge their weapons. Sadly, many of the instances in which the police do resort to violence have proven unnecessary. You wouldn’t know it from watching the evening news, but peaceful resolution of conflict is the norm. It’s just not as entertaining as a shoot-out and so does not make the media’s news cycle. That’s too bad, because if it did, we would discover that the world is really far more peaceful than we ever imagined.

The best response I have ever heard to those “what if” questions designed to corner the pacifist into conceding the necessity of violence in some circumstances comes from singer, songwriter and fellow pacifist Joan Baez. The following is an excerpt from an interview she gave to the Christian Science Monitor in 2013:

“To a question on the limits of her pacifism — or as she says ‘the what-if-someone-is-going-to-shoot-your-grandma’ scenario — she replies: “Anybody who says they would never do this in any situation would probably have to check themselves, but for the way I lived my life and the way I plan to live my life does not include violence,” she said. “The longer you practice nonviolence and the meditative qualities of it that you will need, the more likely you are to do something intelligent in any situation.” (Read the full interview at the Monitor’s website).

In short, it simply is not the case that we have but two alternatives when confronted with violence, namely, counter-violence or surrender to evil. There are many ways to resist evil, resolve conflict, overcome hostility and defeat injustice. Martin Luther King, Mahatma Gandhi and numerous saints of the Mennonite and Quaker traditions illustrate how it is possible to confront evil forcefully without resort to violence. That is why I refuse to defend Jesus’ call to peacemaking and non-violence on terms dictated by anyone’s hypothetical questions. If Jesus tells me there is a way out of the vortex of violence and retribution that does not require me to become violent and vengeful, I believe him. If in any circumstance I cannot see that way, the fault lies in my lack of imagination and inspiration, not in the call of Jesus. For that reason, Baez’ call to “practice nonviolence and the meditative qualities” required to discern that way become all the more urgent. We need openness to the Holy Spirit that the mind of Christ be formed in us.

In the end, my commitment to pacifism is not grounded merely in the above cited verses from Jesus’ Sermon on the Plain or any other particular verse of Scripture. My commitment is Christological. God is the ultimate pacifist who, when his only beloved Son was violently murdered, did not resort to violent retaliation. Instead, God raised up that precious gift we so cruelly rejected, and gave him back to us again. Jesus would not allow his disciples to use the sword in his defense. If violence cannot be employed to defend God’s only begotten son, when in God’s name can it ever be justified?

I close with the conclusion to a book that has been formative in my thinking, namely, What About Hitler? Brimlow, Robert W. (c. 2006, Brazos Press).

“At this juncture it is time for me to respond to the Hitler question: how should Christians respond to the kind of evil Hitler represents if just war and [theories of] supreme emergencies are precluded, and if we live with a different meaning of success?

“We must live faithfully; we must be humble in our faith and truthful in what we say and do; we must repay evil with good; and we must be peacemakers. This may also mean as a result that the evildoers will kill us. Then, we shall also die.

“That’s it. There is nothing else-or rather, anything else is only a footnote to this. We are called to live the kingdom as [Jesus] proclaimed it and be his disciples, come what may. We are, in his words, flowers flourishing and growing today, and tomorrow destined for the furnace. We are God’s people living by faith.”

On a slightly different note, this is All Saints Sunday. Though the texts focus more on the saints struggling within the church militant, it is appropriate to give some thought also to the saints in light. Thus, the following poem:

The Communion of Saints

In the darkness of the nave,
Riding out the temporal wave,
God at rest but never sleeping
On its course this ship is keeping.
Windows screening out the day
Illustrate the hidden way
From which streams through dark of night
Rivers of eternal light.
Holy silence, solemn chime
Joins eternity with time.
Saints in joyous heavenly mirth
Greet those still awaiting birth.
With them mortal voices raise
Their poor, but faithful songs of praise.