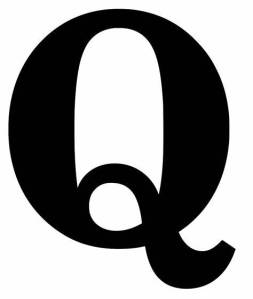 Through a series of contacts who wish to remain anonymous, the Ghost was able to secure an interview with Q, the illusive leader behind the QAnon movement. Though we were given free reign to interview Q on any topic, we were informed that Q would be communicating with us through an opaque media and would not respond to any line of questioning calculated to disclose his/her/its identity.

The Ghost: Good evening…should I call you “Mr. or Ms.” Q?

Q: What’s it to you? I might be all or none of those things, but it doesn’t seem to matter much to my supporters and they are all that I care about.

The Ghost: Yes, your supporters do put a lot of faith in you. But you have to admit, the things you claim, “the deep state,” an elite cabal of liberals practicing pedophilia and cannibalism-that’s all pretty incredible. I have a hard time understanding how your followers can believe these things. You have never provided any evidence to support your assertions.

Q: Well, you might just as well ask a minister, priest or rabbi how their congregations can believe in a God or a devil they have never seen. They don’t even try to prove empirically that these religious abstractions of theirs exist. But that doesn’t keep their people from believing in them. Look, I don’t do anything different from what religion does. People are frightened by a world that is dangerous and full of powerful forces they can’t control and don’t understand. I give them stories, characters and a narrative that helps them make sense of their world. I put a face on their fears and give them something they can trust and believe in-like Q.

The Ghost: So, the deep state, the cabal of liberal elites, the child prostitution ring operating out of pizza parlors-none of that is real?

Q. Is God real? Is the devil real? Does it matter? I give people hope and comfort. I give them something to believe in. Their faith in that-that’s what’s real.

The Ghost: Well this is something of a surprise. I expected you to be…how shall I put it? A person of conviction.

Q. You mean a true believer, a zealot, a fanatic-like my followers? No, I am the one who manufactures objects of faith. My follows are the ones who have the faith.

The Ghost: So what’s in this for you? What do you get out of accumulating a following?

Q. Existence. I mean, what is Q without a following? Just a collection of conspiracy theories; a demented soul muttering nonsense into his beer for the benefit of whichever poor bartender gets stuck with the late night shift; an internet meme on the fringes of Google’s search algorithms. I’m only as real as the faith people have in me.

The Ghost: So, aren’t you concerned that this interview will expose you as a fraud? As someone or something designed to mislead people? What would happen to your following then?

Q. Nothing at all. Look, my people believe what they want to believe. And they want to believe whatever makes their experience intelligible to them. I give my followers simple explanations for their problems and simplistic solutions. What can you offer them? They won’t let anything you say take their safe, understandable world away from them and plunge them into nuance and ambiguity. You will, of course, publish this interview, but my followers will never read it. And if they were to read it, they would reject it as fake news from the mainstream media. So you see, your investigative reporting poses no existential threat to me.

The Ghost: Well, Q, this has been fascinating. Thank you for making yourself available for this interview.

Q. Pleasure is all mine.