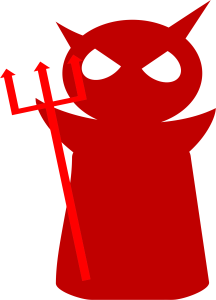 In the wake of Donald J. Trump’s failed bid for re-election to the presidency of the United States, several evangelical leaders reportedly met with Satan to discuss a possible détente and agreement of cooperation. “God stood us up on November 3rd,” fumed Rev. Paula White, a close spiritual adviser of the President. “I prayed myself silly, speaking in tongues and pleading for angelic reinforcements from all over the world. We got squat!” Ralph Reed, lobbyist and former executive director of the Christian Coalition, told us that evangelicals were “sending a message” to the Deity. “We think God needs to understand that he is not indispensable. He needs to know that he can be replaced.”

Said the Rev. Franklin Graham, “We were very disappointed in God’s failure to show up at the 2020 election in the way he did in 2016.” Graham went on to explain that he and his associates were not “rejecting” God. “We just feel that if we cannot rely on God to stand up for his champion and defend Christianity, we have to look for support elsewhere. It is our hope that God will soon wake up, see how his inaction has threatened the future of Christianity in America and step up to the plate. Until then, we have to turn for help wherever we can get it.”

The meeting was arranged by Jerry Falwell, Jr., former president of Liberty University. “We were very encouraged by the outcome of our discussions and look forward to an improved relationship with Satan, ” he said. “True, we have had our differences in the past and there has been some harsh rhetoric between us. But we were able to identify several areas of agreement between the devil’s agenda and our own. Where the future of Christianity hangs in the balance and God seems uninterested in saving it, we need to take a pragmatic approach to protecting Christian morality and family values. After all, we supported a twice divorced admitted sexual predator for president. Why not take help from the devil?”

Ghost reporters interviewed the Prince of Darkness later today who denied the existence of any agreement with evangelicals. “Absolutely no deal was struck,” said the Devil. “They talked. I listened. That’s all.” When pressed on whether any agreement might be forthcoming, Satan expressed some skepticism. “I’m frankly reluctant to commit to anything with them,” he said. “What’s in it for me? My Competition got the divine Name mixed up with these evangelical types and the Trump label. What good came of that? Young people are leaving evangelical churches in droves because they can’t stomach the man. Naturally, I’m pleased about that. Such defections increase my potential market share. But if I’m going to capitalize on this opportunity, I can’t let my brand be tainted with the Trump name. The last thing I need is more bad PR! Of course, these esteemed evangelical leaders all offered to sell me their souls. And I reminded them that I bought their souls already back in 2016. That’s right! They tried to sell me the same souls twice! Who does that? What happened to fair commercial practices and truth in advertising? And they call me the ‘father of lies.’ Go figure.”

Not surprisingly, God declined to be interviewed for this piece. The Almighty typically does not weigh in on the daily news. But on this occasion, the Deity issued a rare, brief press release:

“I’ll gladly accept responsibility for hurricanes, earthquakes, tornadoes and all the other ‘acts’ attributed to me by insurance companies trying to weasel out of paying their claims. But I want to make clear that I had no hand in the 2016 election of Donald Trump. You idiots did that to yourselves.”