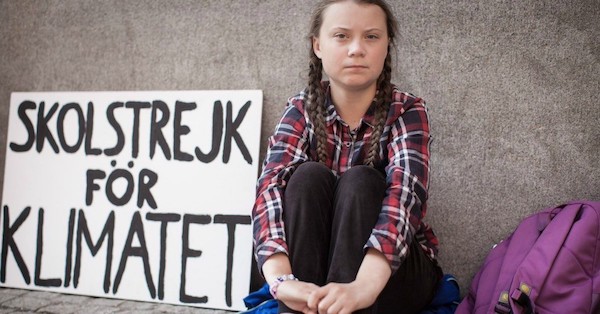 Prayer of the Day: Almighty and most merciful God, your bountiful goodness fills all creation. Keep us safe from all that may hurt us, that, whole and well in body and spirit, we may with grateful hearts accomplish all that you would have us do, through Jesus Christ, our Savior and Lord.

Once upon a time, a little girl spoke and her words ignited an international furor and nudged the world just a little closer to a better tomorrow. I am not speaking of Greta Thunberg pictured above, but the anonymous slave girl featured in our lesson from the Second Book of Kings. This little Israelite girl was kidnapped during one of the many skirmishes between Israel and its arch nemesis, Aram. She ultimately wound up in the house of Naaman, a powerful and distinguished general where she served Naaman’s wife. Naaman had obviously distinguished himself as a mighty warrior. Nevertheless, beneath their supreme military rank, weapons of war, body armor and medals of valor, mighty warriors have the same vulnerabilities as the rest of us mortals. Even men who defeat armies and conquer kingdoms fall like the rest of us before viruses and bacteria. So it was with Naaman who, the Bible tells us, suffered from leprosy. This great warrior, once the star of military parades, seemed fated now to suffer a pitiable death on his sick bed.

But then the little slave girl spoke up. “If only my lord were with the prophet who is in Samaria! He would cure him of his leprosy,” said the little girl to her mistress. II Kings 5:3. The mistress, in turn, relayed to her husband what the little girl told her. Naaman took this information to his king and requested letters of introduction to the ruler of Samaria in order that he might find this great prophet capable of healing even leprosy.[1] Evidently, Naaman was well regarded by the king, who gave him everything he asked for. And so Naaman set out for Samaria, the capital of Israel, with “ten talents of silver, six thousand shekels of gold, and ten sets of garments.” II Kings 5:5. Something appears to have gotten lost in transmission between the little girl, her mistress, Naaman and the king of Aram. The letter appears to seek this marvelous miracle of healing not from the prophet but from the king of Israel. The king is naturally distraught. “Has the king of Aram gone mad? Does he really think I can cure leprosy? More likely he is seeking a pretext for another war!” So the king of Israel rends his garments in distress.

Somehow, Elisha the prophet gets wind of the king’s distress (perhaps through chatter on the slave netowrk?). “No worries,” he tells him. “Send Naaman to me. I’ve got this.” And so the king does. Naaman arrives at the prophet’s door with his entourage, no doubt expecting a welcome befitting a military hero. Instead, he is met by Elisha’s servant who tells this general, who is accustomed to bathing in the pristine waters of his own country, to wash seven times in the muddy, mucky Jordan. This is more than the general can endure. He rides way in fit of rage, his hopes dashed and his pride wounded. No doubt he was entertaining fantasies of returning with his army to knock Israel’s pompous little king off his throne and deliver a sound thrashing to his snake oil peddling prophet who treated him with such contempt. But once again, the voice of reason bubbles up from the slaves. “What’s wrong with you, man? You were ready to give that prophet ten talents of silver, six thousand shekels of gold and ten sets of garments for his services. But he didn’t take any of that. All he asked was that you take a bath. Isn’t even the remote chance of a cure for leprosy worth getting a little wet?” Naaman relents, washes in the Jordan and the rest is history. The story concludes with Naaman, once Israel’s mortal enemy, returning to his homeland a believer in Israel’s God.

We like to imagine that history is driven by the actions of kings, generals, great prophets, presidents and members of congress. But more often, I think, major events are set in motion by anonymous slaves and children. That shouldn’t surprise us, given that we worship the Word made flesh in the infant born to a homeless couple in a barn. And that brings me back to Greta Thunberg who made headlines with her passionate address to the United Nations, chiding world leaders over their gross irresponsibility in failing to address climate change. Our president in his usual presidential manner retweeted the following by someone named “Kellie” “She’s getting the best education socialism can steal. I won’t be held hostage by someone who just got a learner’s permit. Sorry kiddo! Tell Al to try again.” In a slightly more dignified, if equally condescending manner, Russian president Vladimir Putin referred to Greta as a “kind but poorly informed teenager.”  The Illinois Family Institute, a right wing evangelical blog promoting the likes of Rev. Franklin Graham, askes, “can’t Greta Thunberg’s parents keep her from traveling across the ocean to thunder at adults at the U.N.?” If I may summarize these comments, they amount to the old moronic dictum, “children should be seen not heard.” All of this goes to show that weak minds float along in the same gutter. Wise people know that when little girls speak, it behooves us to listen.

Here is a poem by David Wagoner about the fragile, intuitive wisdom of children too often lost on adults and lost to children themselves if ignored, neglected or stolen through socialization in an adult culture.

That child was dangerous. That just-born
Newly washed and silent baby
Wrapped in deerskin and held warm
Against the side of its mother could understand
The language of birds and animals
Even when asleep. It knew why Bluejay
Was scolding the bushes, what Hawk was explaining
To the wind on the cliffside, what Bittern had found out
While standing alone in marsh grass. It knew
What the screams of Fox and the whistling of Otter
Were telling the forest. That child knew
The language of Fire
As it gnawed at sticks like Beaver
And what Water said all day and all night
At the creek’s mouth. As its small fingers
Closed around Stone, it held what Stone was saying.
It knew what Bear Mother whispered to herself
Under the snow. It could not tell
Anyone what it knew. It would laugh
Or cry out or startle or suddenly stare
At nothing, but had no way
To repeat what it was hearing, what it wanted most
Not to remember. It had no way to know
Why it would fall under a spell
And lie still as if not breathing,
Having grown afraid
Of what it could understand. That child would learn
To sit and crawl and stand and begin
Putting one foot forward and following it
With the other, would learn to put one word
It could barely remember slightly ahead
Of the other and then walk and speak
And finally run and chatter,
And all the Tillamook would know that child
Had forgotten everything and at last could listen
Only to people and was safe now.

Source: Poetry, May 2000. David Wagoner (b. 1926) is an American poet who has written many collections of poetry and ten novels. He attended Pennsylvania State University and received a master’s degree in English from Indiana University in 1949. Wagoner has taught at the University of Washington since 1954 and served as editor of Poetry Northwest and was elected chancellor of the Academy of American Poets in 1978. He currently teaches in the low-residency MFA program of the Northwest Institute of Literary Arts on Whidbey Island, Washington. You can learn more about David Wagoner and sample more of his poetry at the Poetry Foundation website.

[1] For reasons known only to God and the inscrutable minds of the makers of the common lectionary, verses 4-6 are omitted from this reading relating what transpired between Naaman and his king. Thus, the congregation finds itself wondering on Sunday morning, “What letter? And how did the King of Israel get involved with this business?”