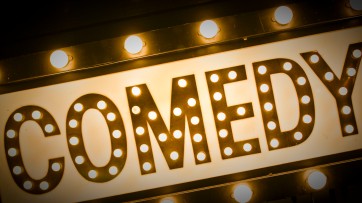 Late night comedy figures are reportedly in a panic over the potential impeachment of President Donald Trump. “This is serious,” Stephen Colbert, host of the Late Night Show, was heard to tell a gathering of his colleagues. “If Trump goes, we are left with Pence-and how unfunny is he.” Colbert went on to point out that Mr. Trump’s departure from office would likely be followed by the elevation of Mike Pence and his election in 2020 or the election of a Democratic challenger-neither of whom are likely to be the least bit funny. “Joking on Mike is like beating up on a kindergartener,” said Colbert. “And the dems? How can you make a joke about a chief executive who goes to work and does the job?” Colbert further explained that, “without Trump, our ratings go through the floor, the networks drop us and we all wind up on the Las Vegas/Atlantic City casino circuit.”

Jimmy Kimmel expressed similar concerns. “Trump has been our meal ticket,” he said. “Oh we got a few good laughs on George W. and Bill Clinton, but that took some work. Donald Trump-that man is a self executing joke. All we have to do is wait for the tweets and soundbites to come in and put them up on the screen.” Seth Meyers concurred adding, “this could be the biggest hit we have taken since Sarah Palin dropped off the grid.” Jimmy Fallen agreed saying, “we might be looking at the driest comedic stretch we have seen since the Obama presidency.”

Daily Show host Trever Noah expressed a more sanguine view. “Look,” he said. “We have to view this philosophically. We have had a great run for over two years. We all knew this would end someday. Trump’s impeachment just means we have to go back to writing our own material for a while.” So, too, comedian John Stewart expressed a degree of optimism. “I have great faith in the American people,” he said. “They gave us Donald Trump and I think they can be trusted to serve up another electoral joke sooner rather than later.”