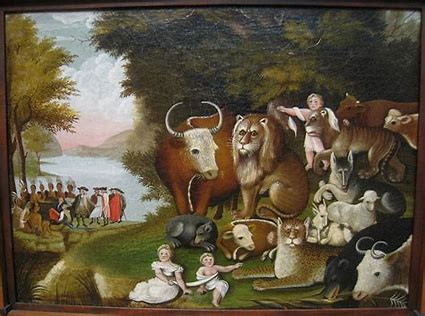 Prayer of the Day: Stir up our hearts, Lord God, to prepare the way of your only Son. By his coming nurture our growth as people of repentance and peace; through Jesus Christ, our Savior and Lord, who lives and reigns with you and the Holy Spirit, one God, now and forever.

“They will not hurt or destroy
on all my holy mountain;
for the earth will be full of the knowledge of the Lord
as the waters cover the sea.”  Isaiah 11:9.

In last week’s reading from Isaiah, the prophet assured us that the day will come when the nations of the world forsake war and turn their weapons into farm implements. If you thought that improbable, you must think utterly absurd this week’s oracle about predatory animals becoming vegetarians and living peacefully among those formerly their prey. Isaiah’s vision of such a peaceable world runs contrary to everything we know about the biosphere. Death is an essential feature of ecology. One generation dies to make room for the next. Healthy vegetation lives off the remains of animals and plants that have died and been absorbed into the soil. The population balance between herbivores and the plants they need to live is kept in check by carnivores. Take death out of the ecological equation and the biosphere implodes. A world without death and killing is unimaginable.

But that might well be the point. The problem is not the boldness of Isaiah’s vision, but the poverty of our imagination. The oracle diagnoses an inability on our part to imagine existence without violence and death. It has become axiomatic that death, along with taxes, is inevitable. That being the case, we make room for death in all of our thinking, planning and doing. Death is always the unacknowledged yet ever present elephant in the room guiding our financial planning, directing our politics and shaping the way we think about heath and medicine.

Violence, too, is accepted as part and parcel of what it means to live. Consider how thoroughly the language of warfare and violence has permeated our talk about every facet of life. Political movements are labeled “campaigns” with strategy meetings taking place in “war rooms.” When someone experiences illness, we say they are “battling” the disease and often say with admiration “he’s a fighter.” We “draw lines in the sand” when discussing issues critical to us and vow that we will “go to the trenches” defending our point of view. We speak of all our social problems in terms of warfare. Our government’s legislature has declared war on poverty, drugs, crime, illiteracy and a host of other abstract nouns, thereby illustrating the truth of the now well worn adage: when the only tool in your box is a hammer, all your problems start looking like nails. I sometimes wonder whether it would be possible for us to have a conversation about anything if all these battle metaphors were magically cleansed from our vocabularies. Or would having to choose new metaphors compel us to think differently, creatively and imaginatively about our world?

The prophet’s job is to kick our imagination into gear. That is important because faith is impossible without imagination. There are mysteries that only imagination can grasp. That is why Jesus always spoke of God’s reign in parables. It is why Paul, after speaking at length about the resurrection of the dead, finally dispenses with all analogies and says, “Listen, I will tell you a mystery!” I Corinthians 15:51. It is why John of Patmos resorts to the lurid images of apocalyptic literature to speak of Jesus’ final victory over the powers of death and of the new creation in which “death will be no more; mourning and crying and pain will be no more.” Revelation 21:4.

What we confess in our creeds to be true is bigger than what we are able to comprehend or even imagine. Yet if our imaginations can be stimulated to grasp even fragments of these mysteries, it becomes easier to imagine and visualize anew the things we can comprehend. The impossible becomes plausible. It becomes possible to imagine Israelis and Palestinians sharing the land and living side by side in peace; to imagine a world in which no one is food insecure or without access to medical care; to imagine an international forum in which disputes between countries are resolved without resort to warfare. Prophetic imagination is what “prepares the way of the Lord.” Matthew 3:3.

Here is a poem by Phillis Wheatly speaking to the power of imagination.

Thy various works, imperial queen, we see,
How bright their forms! how deck’d with pomp by thee!
Thy wond’rous acts in beauteous order stand,
And all attest how potent is thine hand.

From Helicon’s refulgent heights attend,
Ye sacred choir, and my attempts befriend:
To tell her glories with a faithful tongue,
Ye blooming graces, triumph in my song.

Now here, now there, the roving Fancy flies,
Till some lov’d object strikes her wand’ring eyes,
Whose silken fetters all the senses bind,
And soft captivity involves the mind.

Imagination! who can sing thy force?
Or who describe the swiftness of thy course?
Soaring through air to find the bright abode,
Th’ empyreal palace of the thund’ring God,
We on thy pinions can surpass the wind,
And leave the rolling universe behind:
From star to star the mental optics rove,
Measure the skies, and range the realms above.
There in one view we grasp the mighty whole,
Or with new worlds amaze th’ unbounded soul.

Though Winter frowns to Fancy’s raptur’d eyes
The fields may flourish, and gay scenes arise;
The frozen deeps may break their iron bands,
And bid their waters murmur o’er the sands.
Fair Flora may resume her fragrant reign,
And with her flow’ry riches deck the plain;
Sylvanus may diffuse his honours round,
And all the forest may with leaves be crown’d:
Show’rs may descend, and dews their gems disclose,
And nectar sparkle on the blooming rose.

Such is thy pow’r, nor are thine orders vain,
O thou the leader of the mental train:
In full perfection all thy works are wrought,
And thine the sceptre o’er the realms of thought.
Before thy throne the subject-passions bow,
Of subject-passions sov’reign ruler thou;
At thy command joy rushes on the heart,
And through the glowing veins the spirits dart.

Fancy might now her silken pinions try
To rise from earth, and sweep th’ expanse on high:
From Tithon’s bed now might Aurora rise,
Her cheeks all glowing with celestial dies,
While a pure stream of light o’erflows the skies.
The monarch of the day I might behold,
And all the mountains tipt with radiant gold,
But I reluctant leave the pleasing views,
Which Fancy dresses to delight the Muse;
Winter austere forbids me to aspire,
And northern tempests damp the rising fire;
They chill the tides of Fancy’s flowing sea,
Cease then, my song, cease the unequal lay.

Source: This poem is in the public domain. Phillis Wheatly (1753 – 1784) was the first African-American woman to publish a book of poetry. Born in West Africa, she was sold into slavery at the age of seven and transported to North America. She was purchased by the Wheatly family of Boston, who taught her to read and write and encouraged her to write poetry when they saw her talent. The publication of her book, Poems on Various Subjects, Religious and Moral, brought her fame in England as well as in the American colonies. Her poems won praise from no less than George Washington as well as other prominent colonial figures.  Wheatly was emancipated shortly after the publication of her book. She married in about 1778 and had two children, both of which died in infancy.  Her husband was imprisoned for debt in 1784 at which time Wheatly fell into poverty and died from chronic illness. You can read more about Phillis Wheatly and sample more of her poetry at the Poetry Foundation website.