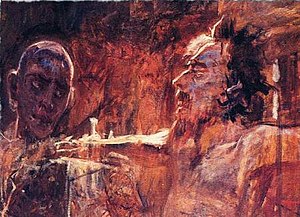 Sunday of Christ the King

Prayer of the Day: O God, our true life, to serve you is freedom, and to know you is unending joy. We worship you, we glorify you, we give thanks to you for your great glory. Abide with us, reign in us, and make this world into a fit habitation for your divine majesty, through Jesus Christ, our Savior and Lord, who lives and reigns with you and the Holy Spirit, one God, now and forever.

“[Jesus] is the image of the invisible God, the firstborn of all creation; for in him all things in heaven and on earth were created, things visible and invisible, whether thrones or dominions or rulers or powers—all things have been created through him and for him.” Colossians 1:15-16.

“When they came to the place that is called The Skull, they crucified Jesus there with the criminals, one on his right and one on his left.” Luke 23:33.

In these days when our attention is fixated on the clash of political titans in the U.S. Congress over the impeachment of the planet’s most powerful ruler, we would do well to recall that the “first born of all creation…” through whom and for whom all “thrones,” “dominions” and “rulers” exist hangs on a cross along with two other condemned criminals.  While we are fixated on the fate of Donald Trump and his presidency, the very lives of thousands of refugee families fleeing from violence, starvation and oppression hang in the balance as they languish in refugee camps and detainment centers on both sides our southern border. Like the criminals hanging on the cross with Jesus, these are folks that  a good part of America hates and many of the rest would prefer to sweep under the rug and forget. So, if you are looking for prime time entertainment, just stay tuned to the major networks. But if you seek Jesus, you will have to shut off the television/laptop/ipad/smart phone and look much harder in another direction.

To that end, I offer the epistle of Rev. Stephen Bouman, a predecessor at the church I last served and now Executive Director, Domestic Mission at Evangelical Lutheran Church in America. He is currently visiting our churches and mission partners on the U.S.-Mexican border:

“Yesterday we stared into the face of the nightmare at the border. With Pastor Lorenzo Ortiz of Good Samaritan Ministries in Laredo, we walked across the Rio Grande River into Mexico and Nueva Laredo. This is where asylum seekers are being sent for processing when they cross our border. It is a humanitarian quagmire. Pastor Ortiz arranged for a bus to take about one hundred to Chiapas on the way back home. The wait for a hearing had become too long, too dangerous, too debilitating. We were with them as they departed from a Mexican immigration facility. The pastor told us the cartels, and those who spy for them are everywhere. We heard so many stories of kidnappings, robberies and worse by the cartels. He and his family operate two houses for those awaiting court hearings. Each dilapidated house hosts over one hundred asylum seekers. We met many who were generous in telling their stories. Almost all were from the Northern Triangle of Central America. A woman and her young son and her sister were fleeing death threats from the gangs in San Pedro Sula, Honduras. Their brother, who operated a food truck was killed because he could not afford the extorted “war tax.” They would be next. A woman with a baby was trying to get to New York because her daughter (accompanied by her husband) was having surgery on her legs. She cannot walk. “This child needs her mother now,” she wept. A woman and her small children fleeing violent abuse from her husband was told to get away because when he gets out of jail in several months he has vowed to kill his family. So many stories. So much heartbreak. We could see that they regarded Pastor Ortiz as an angel. Later we drove to Eagle Pass and were at San Lucas Lutheran Church when two Haitian families were released from ICE detention to the shelter of the church. This is what it means to be a “Sanctuary” church! Pastor Rosemary Ducett, our amazing interpreter, was able to turn from Spanish to French to get their story-an long journey from Chile to Colombia, through the jungles of Panama (and robbers), to the Mexican border. They were tired, their small children were restless and yet able to laugh and play with us. Today we will interview Emma Espino-Olvera and Pastor Julio Vasquez of San Lucas, then cross into Mexico, Piedras Negras, with the Border Hope ministry and meet more children of God seeking safety and hope.

“More later. Just this thought. We have now exported our “border problem” to Mexico. Right now the border is the Jericho Road and our country has “passed by on the other side” of the beaten up human beings. Whether our politics are “red” or “blue” can we see their faces? Can our church see their faces? The only question worth asking is far from “is she documented?” Who is our neighbor?”

Jesus tells us “Whoever serves me must follow me, and where I am, there will my servant be also.” John 12:26. Today I am thankful that there are faithful disciples hanging with Jesus on our border. This may not be headline news, but for those of us who call ourselves Christians, it should be. After all, thrones, dominions, rulers, powers, nations and, yes, presidents come and go. As the old hymn tells us, “Crowns and thrones shall perish; kingdoms wax and wane. /But the cross of Jesus ever shall remain.” Executive orders, acts of congress and the rise and fall of nations, our own included, are destined to vanish in the mists of time. But acts of mercy, kindness and compassion performed in obedience to the King whose reign outlasts time are eternal. At the end of the day, there is but one King deserving of our faith, trust and obedience. There is only one kingdom deserving of our allegiance. Among all the voices competing for our allegiance, there is but one voice that leads from death into life.

Here is a poem by Emily Dickenson reflecting on the nature of Jesus’ reign.

One Crown that no one seeks

While Pontius Pilate lives
In whatsoever hell
That coronation pierces him
He recollects it well.

Source: The Poems of Emily Dickinson: Reading Edition, (c. 1999 by the President and Fellows of Harvard College; edited by Ralph W. Franklin, ed., Cambridge, Mass.) Emily Dickinson (1830-1866) is indisputably one of America’s greatest and most original poets. Born in Amherst, Massachusetts, she attended a one-room primary school in that town and went on to Amherst Academy, the school out of which Amherst College grew. In the fall of 1847 Dickinson entered Mount Holyoke Female Seminary where students were divided into three categories: those who were “established Christians,” those who “expressed hope,” and those who were “without hope.” Emily, along with thirty other classmates, found herself in the latter category. Though often characterized a “recluse,” Dickinson kept up with numerous correspondents, family members and teachers throughout her lifetime. You can find out more about Emily Dickinson and sample more of her poetry at the Poetry Foundation website.