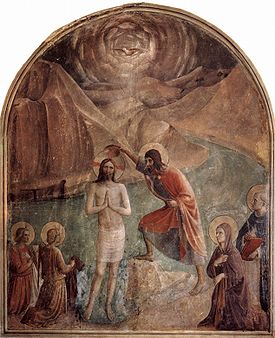 Prayer of the Day: Holy God, our strength and our redeemer, by your Spirit hold us forever, that through your grace we may worship you and faithfully serve you, follow you and joyfully find you, through Jesus Christ, our Savior and Lord.

Two disciples of John the Baptist, one of which was Andrew the brother of Peter, follow Jesus in response to John’s testimony. They ask Jesus where he is staying and they wind up going to Jesus’ place of abode and “remaining” with him. Recall that beforehand John reported that he knew Jesus was the Lamb of God because he saw that the Spirit “remained with him.” The Greek word “meno,” translated in the English version as “remain” is the same in both cases. More broadly, the word means to “abide,” “live,” “dwell,” “continue” or “endure.” It carries with it the sense of determination to “hang in there” to the end. Used as it is in our lesson, the word indicates that, just as the Spirit remains and endures with Jesus, so Jesus’ disciples remain and endure with him. Jesus will make that very point later on when he tells his disciples, “Abide in me, and I in you. As the branch cannot bear fruit by itself, unless it abides in the vine, neither can you, unless you abide in me.” John 15:4. Again, the word translated as “abide” is “meno,” the same word translated as “remain” in our lesson.

Abiding, remaining, enduring and continuing in Jesus is all important for John the Evangelist. Perhaps that is why his gospel ends the way the Synoptics begin: with the disciples leaving their boat and nets behind and following Jesus. See John 21:15-22. There is no ascension story in John’s gospel. It is as though the evangelist cannot imagine the church going on absent Jesus’ remaining fully present to his disciples. The gospel closes with the disciples following after their Lord. We are not told where they are going or what happened next. That is because the story of Jesus is not over and, in any event, it is a story too big for inclusion in any book-even the Bible. Indeed, John tells us that if everything Jesus has ever done were to be written down “the world itself could not contain the books that would be written.” John 21:25.

The Spirit remains with Jesus and Jesus remains with his church, writing into human history too many stories to record even with today’s digital technology. Some of these stories constitute a dramatic public witness. I think of the disciples of Jesus abiding among refugees in wretched and terrifying conditions south of our border. I think of disciples all over the country abiding with and ministering to persons incarcerated for no better reason than that their paperwork is not in order. I think of believers around the world risking their lives abiding with non-white peoples and speaking out against the rising tide of global nationalism and white supremacy threatening their lives and communities. I think of the bold actions taken by my own Evangelical Lutheran Church in America and its congregations on behalf of children and adults threatened daily with deportation from the only home they have ever known. All of this testifies to Jesus’ abiding with his church.

But not all of these stories are quite so visible. I also know many anonymous saints who work persistently each week to provide a community dinner for the homeless, for families that are food insecure and for people living alone who simply crave the opportunity to share a meal with others for a change. I recall the choir members from my prior congregation who remained faithfully with me week after week to ensure that our worship was rich in song and music. I watch with thanksgiving the hospice chaplains who remain faithfully with the dying in their final hours. Finally, I know of a church in Seattle, Washington that remained in its urban neighborhood throughout the 60s and 70s when its white inhabitants fled to the suburbs and transformed itself into a worshiping community reflecting its new neighbors. That same church stubbornly remains in its place today fighting for its neighbors as they struggle to save their homes and their community from domestic colonization, commonly known as “gentrification.” In a very real sense, John’s gospel continues to be written as Jesus remains with his church animating its people through his lifegiving Spirit.

God is the One who remains with us-even after we have messed up; even when the task seems hopeless; even when everyone else has thrown in the towel and gone home. That is good news to those of us who are hearing each day new evidence that the checks and balances in our government, that were supposed to protect us from tyranny, are coming apart at the seams, that our forests are burning up and that the international institutions and treaties that have maintained a semblance of global order for the last half century are failing. The one who sent the beloved Son for the sake of the world remains in and for the world. The one crucified by the world lives and remains in the world. The Spirit that remains with the Son continues breathing life into the world. If the Triune God stubbornly remains in and for the world, who are we to give up on it?

Here is a poem by Matthew Zapruder that I think reflects the kind of quiet “remaining” John the Evangelist attributes to our God and expects from disciples of Jesus.

Source: Father’s Day, Zapruder, Matthew, c. 2019 by Matthew Zapruder; pub. by Copper Canyon Press). Matthew Zapruder (b. 1967) is an American poet, editor, translator, and professor. He holds a B.A. from Amherst College with a major in Russian Literature. He earned an M.A. from the University of California, Berkeley in Slavic Languages and an M.F.A. from the MFA Program for Poets & Writers at the University of Massachusetts, Amherst. He teaches in the low residency MFA program at the University of California, Riverside-Palm Desert and at the Juniper Summer Writing Institute at the University of Massachusetts, Amherst. Zapruder is the author of several collections of poetry, including Father’s Day, from which the above poem is cited, as well as Sun Bear (2014), Come On All You Ghosts (2010), The Pajamaist (2006) and American Linden (2002). You can read more about Matthew Zapruder and sample more of his poetry at the Poetry Foundation website and at the author’s own website.