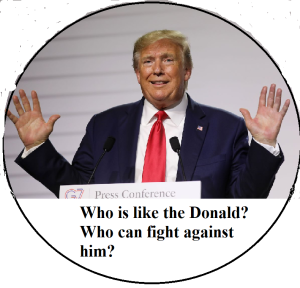 “It’s a sad day for America,” remarked the Rev. Franklin Graham at a gathering of evangelicals at the Billy Graham Library in Charlotte, North Carolina. Irked by the United States Supreme Court’s landmark decision in Bostock v. Clayton County holding that existing federal law forbids job discrimination on the basis of sexual orientation or transgender status, the President and CEO of Billy Graham Evangelistic Association brushed off questions as to whether Christian faith might dictate compassion for LGBTQ families despite how Christians might feel about their lifestyle. “They aren’t ‘families’ no matter what the liberal press says. A family is a dad, a mom and kids. It doesn’t include people living in sin. The law should not sanction sin.” When asked how Jesus might respond to such persons, a clearly exasperated Graham responded at some length.

“I’m so over Jesus,” said Graham. “I never understood what my old man saw in him. Jesus is no true Christian. Every true Christian knows that God hates homosexuals and he hates abortion. That’s the essence of Christianity right there. But when did Jesus ever say anything about these issues? For three years Jesus preached and taught without ever addressing them. Instead, he went about distributing free healthcare, feeding crowds of people that should have been at work and disrespecting our troops by telling people that ‘those who live by the sword die by the sword.’” He added that what America needs is “a truly Christian savior,” a “man who knows what God really wants.”

Graham went on to announce that he will be leading a new Decision America tour to coincide with the upcoming 2020 election. “I’m calling on the faithful now to decide for Donald J. Trump in November,” he told his audience. “God showed up on election day in 2016 to answer the prayers of hundreds of thousands of people across this land who had been praying for this country. We needed a real savior and God delivered!” Graham went on to say that for the president to complete his mission of salvation, he needs the personal commitment of evangelicals. “Donald Trump was crucified by the Democrat House of Representatives, but raised from the dead in the Senate,” he said. “As Georgia representative Barry Loudermilk has pointed out, Donald Trump suffered more than Jesus ever did. And when he rose up from the death sentence of impeachment, he didn’t go scampering home to his dad. No, he smacked down everyone who betrayed him and took command of the country. Did you see how he clubbed and gassed those demonstrators in DC on his way to church? Now that’s what I call a savior! That’s what I call true Christianity.”

Graham also announced a soon to be released campaign button that will feature an image of the president and the words, “Who is like the Donald? Who can fight against him?”