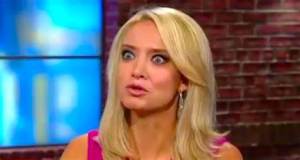 The president’s press secretary, Kayleigh McEnany, was admitted to Walter Reed Medical Center today with complaints of dizziness and nausea. Ms. McEnany reportedly collapsed and lost consciousness for several seconds following an interview on CBS This Morning with co-host Anthony Mason. She was fielding some difficult questions about President Trump’s promotion of the drug, hydroxychloroquine, contrary to the medical advice of his own Covid-19 task force, the CDC and the WHO as well as his endorsement of Dr. Stella Immanuel, a pediatrician who not only promotes hydroxychloroquine as a miracle ‘cure’ for COVID-19 but also insists that people do not need to wear masks in public to prevent spread of the disease.

Although the Ghost was prohibited from interviewing McEnany’s treating physicians, we have learned through a White House staff person wishing to remain anonymous that Ms. McEnany’s condition is now stable and that she is due to be discharged soon. Our source told us she was diagnosed with a severe case of vertigo, thought to be the result of strenuous fact spinning. “Ms. McEnany has had to respond numerous times to the president’s remarks at odds with reality and the strain is starting to show.” He went on to say that he has no doubt Ms. McEnany will make a full recovery. “She’ll be fine,” he said. “But I expect she will be a little off balance for a while.” Her private secretary, Stan Down, assured our reporter that residuals from this medical episode will not interfere with Ms. McEnany’s professional responsibilities as presidential press secretary. “She’s been off balance for as long as I’ve known her,” he said. “That’s never slowed her down before.

Ms. McEnany’s predecessor, Stephanie Grisham, commented on this episode saying, “I can fully sympathize. This is exactly why I never held a press conference during my tenure as press secretary. The very thought of having to spin everything that comes out of Mr. Trump’s mouth made me nauseous and dizzy.” Grisham’s predecessor, Sarah Huckabee Sanders, had a different view. “I was always able to keep my balance,” she said. “The thing is, you need to make peace with the idea that truth is simply a philosophical concept. It isn’t real. It’s all in your head and it can be whatever you want it to be. And facts, well, there are as many alternative facts as there are alternative universes. So you just pick the ones you like and to hell with the rest.”

The president tweeted his support for Ms. McEnany, saying, “I wish her a quick recovery. She’s the best. Always keeps the press at bay.”