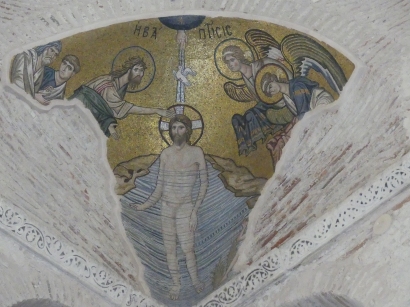 BAPTISM OF OUR LORD

Prayer of the Day: Holy God, creator of light and giver of goodness, your voice moves over the waters. Immerse us in your grace, and transform us by your Spirit, that we may follow after your Son, Jesus Christ, our Savior and Lord, who lives and reigns with you and the Holy Spirit, one God, now and forever.

“In the beginning when God created the heavens and the earth, the earth was a formless void and darkness covered the face of the deep, while a wind from God swept over the face of the waters.” Genesis 1:1-2.

Life had its primordial beginnings in the ocean. So evolutionary biologists tell us. The ancients knew this instinctively. There are countless legends recounting the earth’s creation arising out of epic battles in which divine heroes defeated great sea monsters, forming the land from the heart of the sea. So, too, the biblical account in our lesson from the Hebrew Scriptures has God’s breath sweeping over the waters, breathing into them what will soon yield light, land, fish, vegetation, animals and finally human beings in God’s own image. 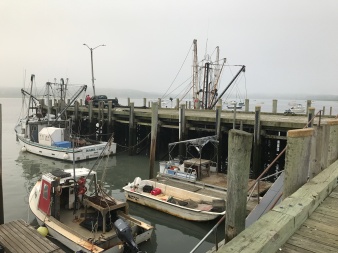 Water is life. You can’t get away from that reality when you live in close proximity to the ocean. Every morning little boats leave our harbor here in Wellfleet seeking, fish, clams, scallops and the rest of the ocean’s bounty. Though the tourist industry is by far the biggest contributor to our economy, the fishing industry remains an important piece of our common livelihood. It has always been so. In centuries past, the marshes with their wealth of shellfish provided sustenance for the Nauset tribes inhabiting Cape Cod long before the coming of European settlers. Their culture and society revolved around the rhythms of the tide and the changing seasons bringing with them varieties of sea mammals and shore birds. They understood, as should we, that our very lives depend upon the waters. 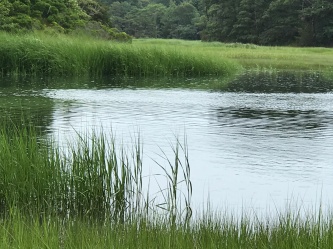 But as necessary as water is to life, it is also an agent of death and destruction. You can appreciate the beauty of the ocean from the shore, but, as one mariner once told me, “if you venture out into the ocean, you better respect it.” The ocean bottom is littered with ships great and small caught in storms and wrecked on shoals. The ocean has claimed the life of many an experienced skipper who made but one dangerous miscalculation. The cemetery down the road from where I live contains the remains of some.  One of them was Elisha Higgins, Jr., son of Elisha and Rebecca Higgins. He died at sea in 1836. His epitaph reads: 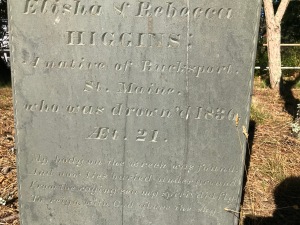 “My body on the wreck was found
And now lies buried underground.
From the raging sea my spirit did fly
To reign with God above the sky.”

The biblical witnesses knew all too well the dangers of the ocean, the haunt of the great monster “Leviathan.” Psalm 104:25-26. The terror it held for Israel is reflected in the 107th Psalm:

Some went down to the sea in ships,
doing business on the mighty waters;
they saw the deeds of the Lord,
his wondrous works in the deep.
For he commanded and raised the stormy wind,
which lifted up the waves of the sea.
They mounted up to heaven, they went down to the depths;
their courage melted away in their calamity;
they reeled and staggered like drunkards,
and were at their wits’ end.
Then they cried to the Lord in their trouble,
and he brought them out from their distress;
he made the storm be still,
and the waves of the sea were hushed.
Then they were glad because they had quiet,
and he brought them to their desired haven.
Let them thank the Lord for his steadfast love,
for his wonderful works to humankind.
Let them extol him in the congregation of the people,
and praise him in the assembly of the elders. Psalm 107:23-32. 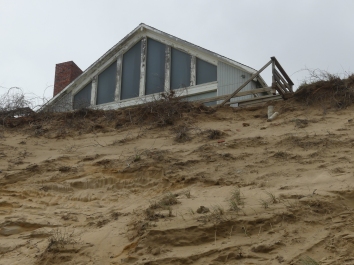 Again, we who live on the Cape are painfully aware of this reality.  The ocean is literally taking the ground from under our feet. Cape Cod is being eaten away by the ocean at an average rate of three feet per year-and that is without the aid of global warming. There are not a few summer homes and cottages, once a safe distance from the ocean’s edge, that are not long for this world-like the one pictured. The Cape is only about twenty-thousand years old. While that precedes all recorded human history, it constitutes a mere second in terms of geological time. Another ten thousand years and the land I am living on will be under the ocean.

So it should not surprise us that Jesus’ ministry begins with immersion in water, the bearer of both life and death. Just as the waters of the Jordan bringing life to the promised land should summon up the image of creation, so too we should hear in the words “this is my beloved son” an echo of words spoken to Abraham centuries before: “After these things God tested Abraham. He said to him, ‘Abraham!’ And he said, ‘Here I am.’ He said, ‘Take your son, your only son Isaac, whom you love, and go to the land of Moriah, and offer him there as a burnt-offering on one of the mountains that I shall show you.’” Genesis 22:1-2.

Without mincing words, the Sacrament of Baptism is a human sacrifice. It plunges us into the darkness of death. In it we place upon the altar a human life and tie it to the destiny of a man who poured out his own life proclaiming the reign of God under the shadow of an empire that ultimately crucified him. And among us Lutherans, that life most often belongs to an infant who has no more say in the matter than did poor Isaac. Let that sink in and think about how often you may have heard people say to their children, “I only want you to be happy.” Actually, I don’t believe I have ever said that to my children. Of course, I would prefer that they be happy rather than unhappy. But I want more for them than happiness. I want for them to be faithful disciples of Jesus. I want them to be good, compassionate and courageous. If the price of that is the loss of their happiness, so be it.

Reflecting on Jesus’ baptism, as well as our own, is a good way to begin the secular new year. A good plunge into the waters of life and death might be exactly what we need. It could be a long time before limitations on the accoutrements of happiness imposed by the Covid-19 pandemic are lifted. But opportunities for doing justice, exercising compassion and caring for our neighbors abound. Those of us engaged in this good work often discover that the rewards of friendship and community, whether cultivated within our households, built from behind masks at a socially safe distance or developed in cyberspace, bring us a depth of joy worth more than that elusive thing called “happiness.” With any luck, this horrible pandemic will at least have taught us that happiness is highly overrated.

Here is a poem reflecting on the ocean and its life giving yet death dealing power over all souls that encounter it.

The oceans of the world are one.
One great commonwealth
Teaming with protoplasm
In every conceivable form,
Yet one being is she,
One heart and one soul.
Though she rules the better part
Of this planet, still she rages,
Throwing herself against
Rocks, seawalls and dams
Designed to keep her at bay.
She stretches her body to cover
The sandy shore as a lover strains
And struggles in the embrace,
Then withdraws to her place,
Exhausted, satisfied yet
Even so planning her next encounter.
Her appetite knows no limits,
Hungering forever and always
For more sailors and ships
To devour and hide forever
In the depths of her icy bowls.
She is so deep, so dark and so blue
That being in her presence empties you,
Draws all memory out of your soul
And leaves nothing but sound
Of breakers crashing over sand,
Fragments of stone and shell
Tumbling head over heel
Winds capping the dark blue
Waters with frothy white,
The roar of churching tides,
But above all, the deafening silence.
They say that in the womb of that silence,
A man can lose his pain.