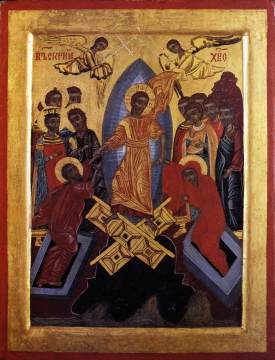 RESURRECTION OF OUR LORD

This year Easter Sunday will fall at the apex of a pandemic the likes of which few of us have seen in our lifetimes. As we rise to celebrate the resurrection of Jesus, the death count from Covid-19 will likely be at its peak. The Sunday on which we usually anticipate packed sanctuaries, our churches will be empty and we will be shut up in our homes. This is a national calamity like no other. On the evening of the 9/11 attacks, we flocked to the church where we found comfort in worship, prayer and the warmth of human embraces. This national crisis compels us to stay far away from each other, avoiding human contact. The coronavirus appears to have rendered ineffective the church’s most powerful agents of healing: the Word calling us into assembly, the sacrament of our shared holy meal, the consolation of the community, the redemptive power of congregational singing and the corporate witness of the gathered people of God in a singular time and place pointing to the larger communion of saints we confess.[1]

Then again, perhaps this Easter is a lot closer to conditions on the first Easter morning. There was no church that day. The disciples were all missing in action and Matthew doesn’t tell us whether they were all together or whether they were scattered across Judea when they hid in the shadows. Unlike Mark and Luke, Matthew says nothing about why the two women were going to the tomb. There is no mention of bringing spices to embalm Jesus’ body. Were they going simply to weep at the graveside? Or is it possible they had an inkling the story of Jesus had not yet come to a close? Is it possible the women came to the tomb not in despair, but in hope? Is it possible they did not come that first Easter morning expecting to find a dead body? I don’t have answers to these questions. But over the years I have learned that the gospels seem more intent on evoking the right questions than giving us the right answers.

These times demand of us a faith that looks for hope in the graveyard. This year Easter comes to us, not as the triumphant conclusion to Holy Week, but as a longing for sunrise in in the middle of a Lenten nighttime that seems to have no end. For many in our midst, Easter will be the promise to which they cling as the darkness of death overtakes them. For many, Easter will be the strength required to stand at the window of an isolated ICU wing and bid a last farewell. The glib phrase that I hear again and again over numerous media, namely, “We’ll all get through this together,” rings false. No, we will not all get through this together. Some will be separated from us and we will have to find a way of going on without them.

This adds a note of urgency to the importance of preaching the promise of Easter. I am not sure we always do that as boldly as we should. Many preachers of my generation have been greatly concerned that preoccupation with eternal life will somehow divert us from addressing evils and injustices in the here and now. If we get our pie in the sweet by and by, why concern ourselves with the trials of this passing world? So the argument goes. The late Marcus Borg, a teacher and theologian I greatly respect, argued in one of his last books that Christianity is losing members and influence because its preaching and teaching are mired in antiquated language and a world view that no longer makes sense to Twenty-First Century people. “Heaven” is one of the concepts he finds unintelligible to modern thought. Borg declares that he has no need for the promise of personal resurrection from death and that “We die into God…that is all I need to know.” Speaking Christian, Borg, Marcus, (HarperCollins Publishers, Inc., c. 2011), p. 201.

Is that really enough? For my own part, it might be. I have lived for sixty-four happy years. That’s not particularly old by my demographic. Of course I would like to live a bit longer. But who doesn’t? I have had a long and happy marriage. I have seen my children grow up into mature, kind and productive adults. I have had two fascinating careers that have been challenging, exciting and deeply rewarding. Whatever regrets I have pale in comparison with life’s many rewards. So, yes I suppose I could simply “die into God” and be content. But what about my grandson, Parker, who lived for only a day in a PICU incubator? What about the millions of children who live for only a few years knowing little more than sickness, abuse and an aching hunger? What about all the Black Americans who knew only slavery and never got to see the inauguration of Barack Obama? For those whose last breath is a prayer of thanksgiving, dying into God might be sufficient. But for those whose final word is a cry of lament, not so much.

An episode in John Updike’s first novel, The Poorhouse Fair, raises this very question. Updike’s story takes place in a state run home for the destitute elderly overseen by prefect Stephen Conner. Conner is a product of the New Deal. He believes in the inevitability of human progress through social evolution and the perfection of governmental institutions. Conner becomes engaged in a conversation among the residents about the afterlife. He shares his vision of “heaven on earth” formed in a future society where illness is overcome by advanced medicine; pollution eliminated through harnessing atomic power; and oppression defeated through the spread of democracy. Mrs. Mortis, one of the residents, asks him whether this heaven on earth will come soon enough for her to see it. Conner responds: “Not personally perhaps. But for your children, your grandchildren.”

“But not for ourselves?”

“No.” The word hung huge in the living room, the “o” a hole that let in the cold of the void.

I share Mrs. Mortis’ sentiments. If we cannot say confidently to a bereaved parent that what God began in the birth of their Child God will complete and weave into the fabric of a new creation, then we don’t have much of anything worthwhile to say. If the unsatisfied longings of billions for justice, peace, freedom and life never find fulfillment in God’s future, then for too many that future will have been a cruel hoax. A robust Easter faith is not a flight from reality. There was nothing more real than the tomb to which the two Marys were drawn on that morning of our Lord’s resurrection. But I think the women sensed what the gospel goes on to tell us: the tomb is not the only reality and it’s not the last word.

The Easter proclamation is a reminder that the threat of death is finally as empty as was Jesus’ tomb. That doesn’t make dying easy or erase pain of grief. St. Paul does not tell us that death isn’t real, but he does tell us that it has lost its fatal sting. We are not told that we shouldn’t grieve. Rather, we are told not to grieve as those who have no hope. I can endure the pain of separation I am bound to feel at home on Easter Sunday because I have the joyful expectation of being together again at some point in the not too distant future with my siblings in Christ. I can endure losing the ones I love because I believe they are not lost to the God who raised Jesus from death. I can endure the end of my own life because I believe that I will remain within the communion of saints who anticipate the resurrection of the body and the life everlasting. I take infinite comfort and joy from the above image of Jesus breaking death’s gates and leading Adam, Eve and all their descendants into the sunshine of a new creation. Easter is different this year. But it is still Easter. The Lord is risen. Alleluia!

Here is a poem by Sister Maris Stella that preaches the resurrection with greater power than many a sermon I have heard on the topic!

on mountain tops where
dropped from the air
or hurled
against the world
their bones grow cold
among the old
rock-frost above the tree-line
they will rise up with the divine
breath breathed into them again
as on the first of men
Adam, newly conceived of clay
on the sixth day
God breathed even somewhere Adam will rise
opening again his eyes
on the world to find
nothing much changed but of a mind
that he was blind before
Abel, first-slain
having lain
longer in the earth than any other man
and Eve with the look of the new Eve
upon her but still Eve
they will rise up having
the terrible trumpets blown
would cry: this is doom

who will record the innumerable horde

in hope to see
what publican will mount into a tree

of whole tribes and families growing up out of the ground

what earth does ever spring
is only a hindt of the thing.

Source: Poetry, April, 1943, pp. 24-25. Sister Maris Stella (1899-1987) was born Alice Gustava Smith in Alton, Iowa. She graduated from Derham Hall High School in 1918. Two years later she entered the novitiate of the Sisters of St. Joseph and took the name Sister Maris Stella. Smith received her undergraduate degree from the College of St. Catherine with majors in English and music. Shortly after receiving her degree, she became a faculty member of the college. She earned her master’s degree in English at the University of Oxford. After returning from Europe she resumed her teaching role in the English Department at St. Catherine’s. She became a popular creative writing teacher as well as a poet-in-residence.

[1] Yes, of course we have Facebook streaming, U Tube and Zoom. But without wading into the morass of argument over the appropriate use of such tools for worship, let me just say that, for me, a computer screen is a lame substitute for a gathering of people who give you a face to face smile, punch your arm and slap you on the back.